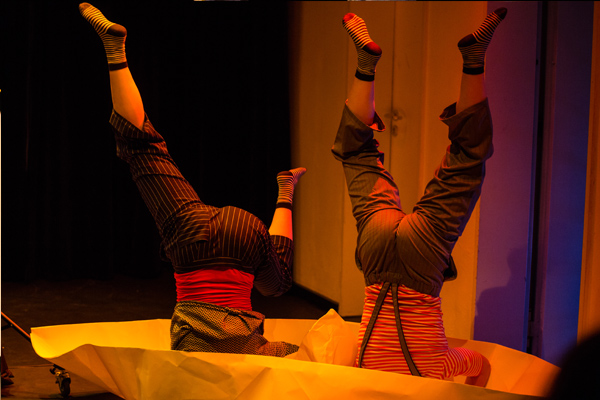 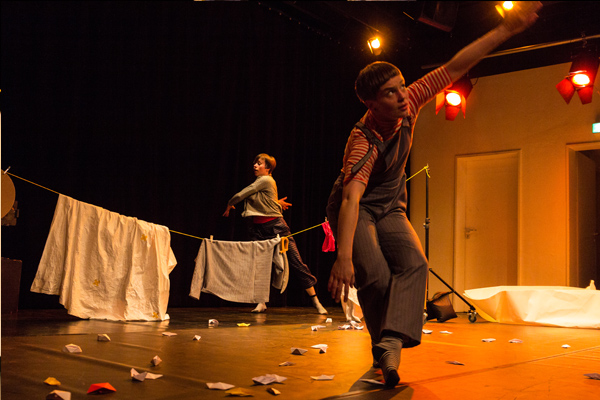 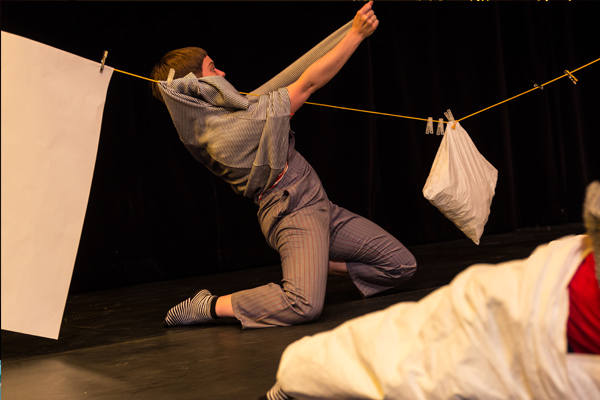 „All beginnings are hard“ is a well-known German proverb that is used when dealing with new situations or challenges, or in the words of Goethe “ all beginnings are cheerful (“Aller Anfang ist heiter”), referring to the lightness of the unknown. Staged within the cycle of a day, the dance production Aller Anfang aims to expose this lightness and at times difficulty in being confronted with new situations. Accompanied by oversized objects (design by: Sounds of Silence) on stage, dancers Johanna Roggan and Josefine Wosahlo explore the perception of taking the very first steps. What does the body do? How and from whom do we learn new things? From this point, a spontaneous action develops, drawing a child’s day from morning to evening. The artifacts of this past day are collected on a yellow thread stretched across the stage remaining as memories.

The dancers encounter themselves and uncover each other. They explore their new and unknown territory through playfulness, imagination and companionship. Objects and images transform through a permeable environment, as expressive and youthful physicality is crafted alongside the cadence of musical compositions by Gregor Praml. Sounds evolve to words and gestures to language, returning to the end of the day to where it all began: „All beginnings“.

In the spring 2017 the Dresden dance company the guts company produced a dance piece for small children in collaboration with the Frankfurt choreographer Célestine Hennermann. Since 2015 Hennermann has been the dramaturge of The guts company. The guts company is a young dance company from Dresden, founded in 2013 by Johanna Roggan and Josefine Wosahlo, and aims to address the inner, physical and also emotional center of the audience. With their involvement in the local dance scene, they are significantly involved in the development of Dresden’s independent dance scene.

In their productions the company works as an open network and is always looking for project-related partners from dance, music, visual arts, stage design and the new media. Cross-genre contemporary dance pieces, dance films, site-specific productions, interactive productions and performative installations are created in these contexts.

„Dancing and gestural, especially mimicking elements tell of the learning and experiencing while exploring the surrounding world(s), be they real or embedded in the game, which comes along cautiously and gropingly or rapidly, loudly and impetuously. All this is danced in a fine and wonderful way.”
Von Luise Wolter, Dresdner Neue Nachrichten, May 16, 2017

“This choreography is determined by the desire to move, which is actually peculiar to all children and which often leads to daring to make a start, to move on, to make a big circle and then to come back again. This also determines the dancing of Johanna Roggan and Josefine Wosahlo in dialogue with the music of Gregor Praml, who knows how to vary a happy children’s song in the morning in many ways, but without losing the melody. The dancers react to this, so the themes and the variations are also found in their work. Dance and play merge into each other and there they are probably quite close to the way one can observe it with children, who suddenly come from the concentration of the play into the freedom of a moving gesture, in order to dedicate themselves immediately afterwards to their occupation. „All beginnings…“, yes, of course you know, „is hard“, and so it goes on. This beginning might be difficult in terms of winning over the target audience, because it has not been usual for the independent dance scene to address such a young audience. High time! But with regard to this successful production, one can say of Goethe: „All beginnings are cheerful“. Who would contradict Goethe.”
Tanznetz, published on 04.05.2017, by Boris Michael Gruhl

In co-production with the Societaetstheater Dresden and the Theaterhaus Frankfurt. In cooperation with the Dresden Frankfurt Dance Company. Supported by the Doppelpass Fund of the German Federal Cultural Foundation, by the Cultural Office Frankfurt / Main, Department of Cultural Promotion and Information, Performing Arts, the State Capital Dresden – Office for Culture and Monument Protection and the Dresden Foundation for Art and Culture of the Ostsächsische Sparkasse Dresden.